It cost us dearly. Not all my warriors agreed, or coped. Vhystor killed the Chaplain. Saved me the work I pain to admit. Nanda and Jahrl Wurst were caught by the Grey Knights. The Ordos all together killed 47 of my staff and erased the assets they could find, The Cliffloft on Terra, safe houses on Dressen, Melior and Necromunda. Eventually the Traders were brought down by the Navy. They killed Borsus twice, yet there he stands. I believe all of the Ordos declared us Heretics, Malleus Diabolica Majoris I believe. Quite a career move.
They are wrong.
No team can match our tally. No other Inquisitor meet our ambition.
I still have a heart.
It’s pure! and 6’2”. Sister Valencia, Repentia Illuminati, Fugitive and master pathfinder. Trained seraphim first class, before her incident. She took a wrong turn during the penitence, learned to track and hunt with the Kroot Mercs and ended up in the hive game, syndicate business. She is invaluable. I love her.
The Master can cheat death - a gift in this trade. Peculiar, ancient being. A recluse, with a way with mirrors and seeing. They all want his service, the cults, the ordos... Works for us now. I am permission to cross boundaries and means to get the best tools.
Borsus, the weapon smith. The team always called him Meatloaf. I blame my upbringing for not sticking with the name.  Tough as they come, stitched together more times than he can care to count. 300 pounds of instinctive cunning, gangs over school, violence over words, speed beyond all that mass. Over weight, over powered. Borsus has a way with guns. They make him smile.
“Nevvie and Chaide”, nicknamed after the classic refcast strip. Master Orsos made them before he was killed. Psychological warfare, that hollow steel can take and deal a beating. Lewis loves to drop them from the cutter.
Lewis is the pilot. Never see him around. Even with the massive cutter around him. He’s stealth, reflexes and skill keep saving us. Maybe the Master is overkill? Posh and well articulated, Lewis loves his craft and only leaves it to inspect it really.

That’s us, re-focused and re-arming.

I am getting in the mood for this gang. Something has clicked with each of the =I=trilogy projects. My own bar for the final part, the good will be quite high - it needs to be really different and really accurate.

So inspired by John's Guest Starring, and some of the other conversions my mates are doing, I wanted to make something different out of the Nurgle guy. To really stamp personality on him. The pose being all close combaty, I felt a shooter would be a great way to stand out from the Ork Nob two-handed closecombatweapon conversions and alike.

In both of my projects writing short stories has proved a lot of inspiration, so I penned something simple together to get in the mood and dived in.

This will be my favorite model in the gang so far. Sometimes you wait until the finished piece to know if it works or not. This guy is going to work. His physique is going to beautifully underline the differences in the gang. Borsus will be right facing, to flank Inquisitor Silas with Valencia.

Here's a WIP shot from the iPhone, the green-stuff still being worked on. 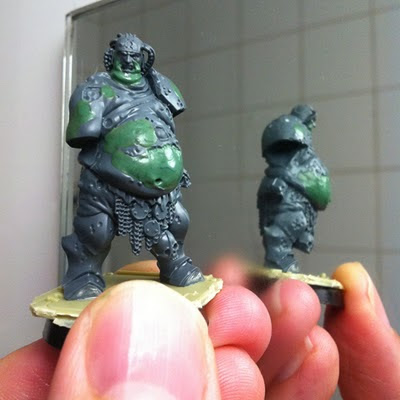