My most extensively converted true scale marine to date.This warrior mystic will be my count as Chief Librarian Tigurius for allied marine continent or possibly eventually a full Legion army using Codex Space Marines. I like how the B&W photos merge GS and plastic. Human WIPs for scale. 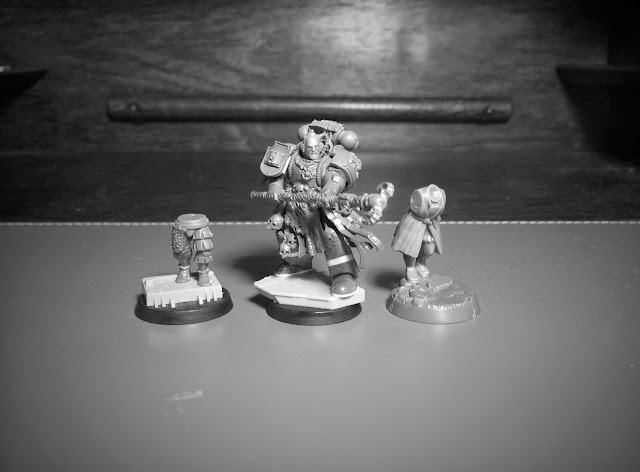 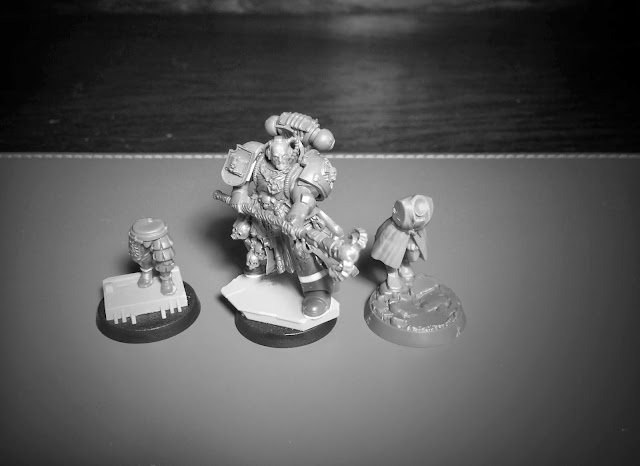 Preparing for my first game with the army, first 6th edition game and first game of Warhammer 40000 in over two years this Sunday!

I will be going against a very experienced and active Tyranid player, who also appears to be a very nice chap with good contacts in the community here. To my pleasant surprise I've recently realized a bunch of very old skool Dakka Dakka members live in the Bay Area. People I've known online for a decade and people who regularly win big tournaments in the USA. So looking forward to trying not to get tabled as I figure things out.

For those of you whom I appear a pure modeling and painting geek, I can confirm I also used to be a gaming geek, with several 3rd place finishes in tournaments and 6th overall in the UK Grand Tournament finals (140 players) in 2004 I think. Just very rusty these day. After active 3rd and 4th editions, I only managed less than 10 games of 5th.

When I build armies I have a few things that drive the design, things that I like when playing the game.

For reference my old UK GT army was Iron Warriors - but included three different close combat squads in rhinos, a pure close combat dreadnought!, Basilisk, Winged Daemon prince and no duplicate units. It was very different from the Obliterator and Defiler spam that was the complete norm for Iron Warriors.

So this is what I will be starting my come back and 6th edition with. The Storm Raven is the only unit that isn't equipped the way I like, waiting for the Inquisitorial gun cutter to be finished. That conversion will feature hurricane blotters, assault cannons and enough psybolt ammunition to drown a hive fleet. Until then my Vendetta conversion will be a stand in, as equipped.

Let me know what you think, in particular if the point costs are wrong and expect an army report sometime next week.

“Berthold, the formidable off-spring of Terran Nobility cast aside as a child with fearsome psychic potential only to grow into a Lord Inquisitor of incredible magnetism, charisma and intellect, is perhaps the most dangerous man on Rhisienne. Von Lochov is a master strategist who’s worth is best measured in the deep respect he enjoys amongst the Astartes, but several forces beyond humanity hunt for his soul”

“When the God Emperor created his demigod generals and their Legions of super warriors he made them adaptable and all powerful, but he also designed each to perfect an aspect of warfare and to fulfill a unique role fitting to their Primarch’s character. The XX would be the Emperor’s Special Operations Forces, the most independent, secretive, clandestine, unorthodox and creative of all of his Legions.”

“The private army of a Noble house with access to Inquisitorial equipment and training from the Astartes, Loyal to the core, experienced and stubbornly fearless.”

“Dune Twists are master pathfinders - outcasts whose mutant elders have roamed the great desert for centuries of tribal wars and incredible hardships. Small teams are often lead by Legion agents and advisors”

“The Charter or Rogue Trading is one of the oldest and most powerful legal documents in the Imperium of Man. Rogue Traders are tasked to push the boundaries of imperial trade and produce to uncharted and at times extremely high-risk / high return territories. Leonard Delel is an examplery one, ambitious, cunning and seemingly with seven lives to spend. Delel’s special expertise is in Xenotech and he is currently subject to an Inquisitorial investigation.”

“Attack craft capable of rapid and clandestine insertions of infantry are an important part of XX operations and the legion employs a wide range of different craft, often custom equipped for specific missions”

“Master Omegon, a Dreadknight Pattern dreadnought unlike anything the Forges of Mars can manufacture today, is a relic of immense destructive power and a sage counsel to his chapter. From his legendary triumphs in flesh, through epic injuries, he has continued serve the chapter in death since the Heresy. ”

My second take of the brilliant Nurgle Lord, and first of three Plasma Cannon models for the retinue. The first one, Borsus of the Red Storme Riseth thrown in for reference and to show how different the Legion palette is.

I've promised more and better pictures of the various henchmen and what not, and once I have a few more finished I will do that. 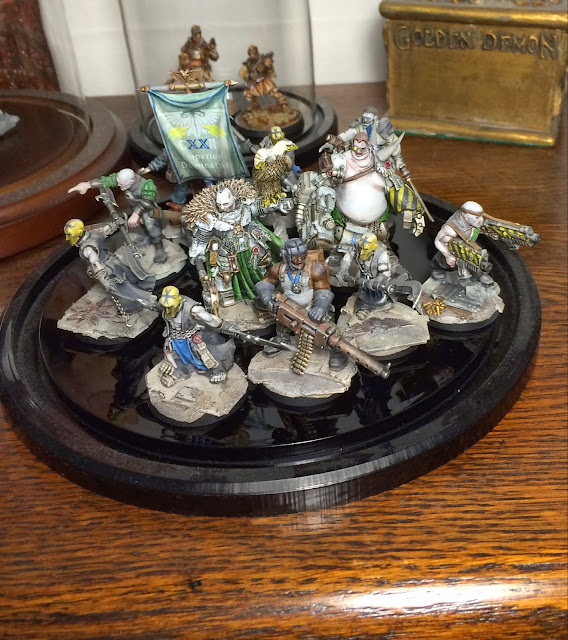 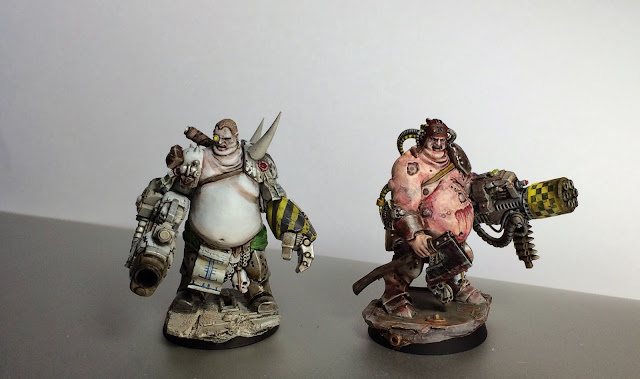 I know I released the first of these to mixed reactions, but having just finished the squad ready for painting I am very excited about them. The right paint job that emphasizes their weight and the materials combined with the scale that goes missing with out reference is going to make this a great looking part of the Army that adds another important point in the range of scale in the force.

With out further ado:


“Praetorians are the absolute elite of  Skitarii (the official term for Mechanicus military forces), augmented with a sophisticated array of bionics and powered suits of armour. The Centurions are heavy battle suit originally built for the Astartes fire support roles, but modified versions were created for the Skitarii and have become the hammer of many Praetorian missions” 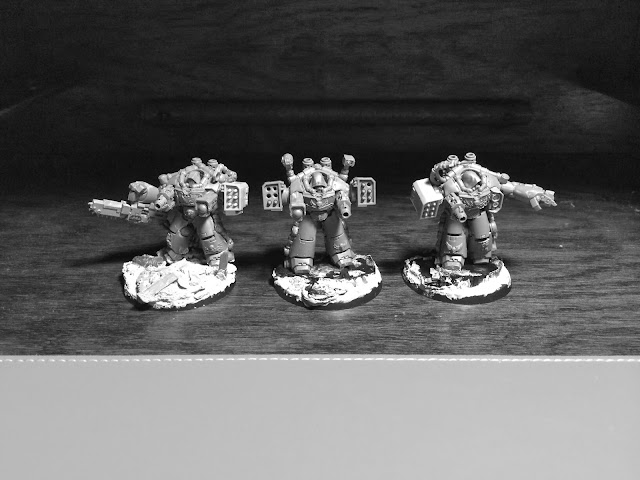 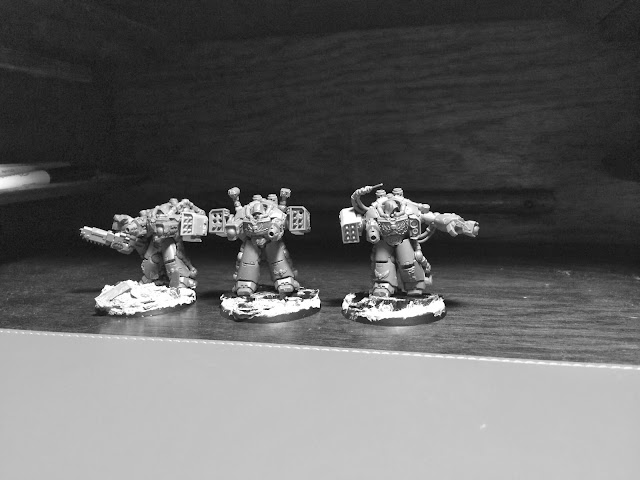 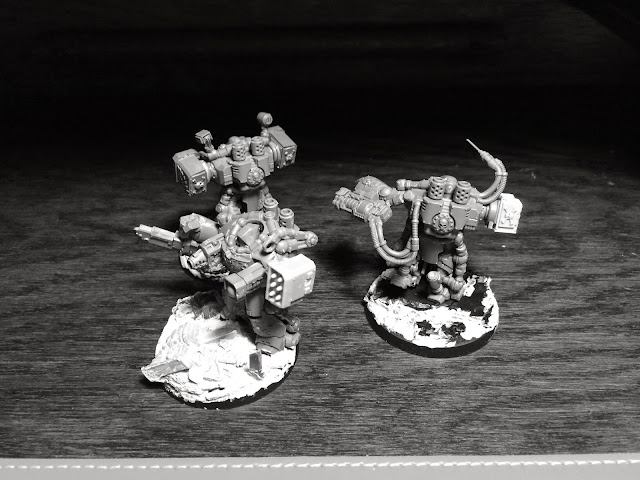