This is where it gets controversial. Where I will be publishing fragments of whole. I decided to do it anyway, because I will be painting one or two models at a time and I think people will enjoy seeing steady updates. It won't be until Christmas when I would have had the first full squad of models to share and be able to share the full vision as intended.

Finished now are Iron Priest in Terminator Armor, carrying a massive rotator cannon, and the first Wulfen, with a thunder hammer and storm shield. They are first two of in total 10 wolf guard terminator rules using models that form the bulk of the army and study and push the boundaries between a Sky Warrior and the Canis Helix gone rogue and millennia in the Eye of Terror. 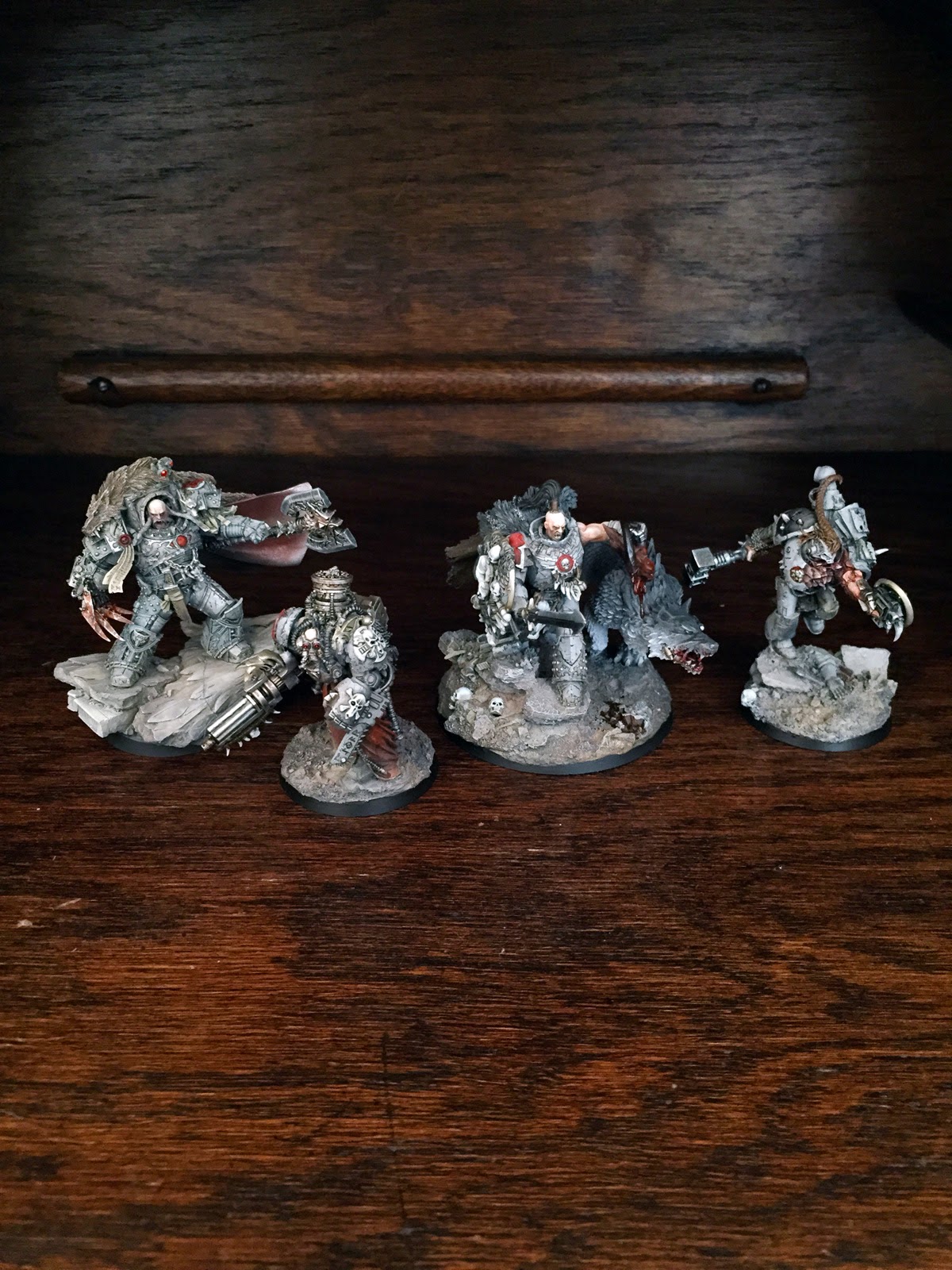 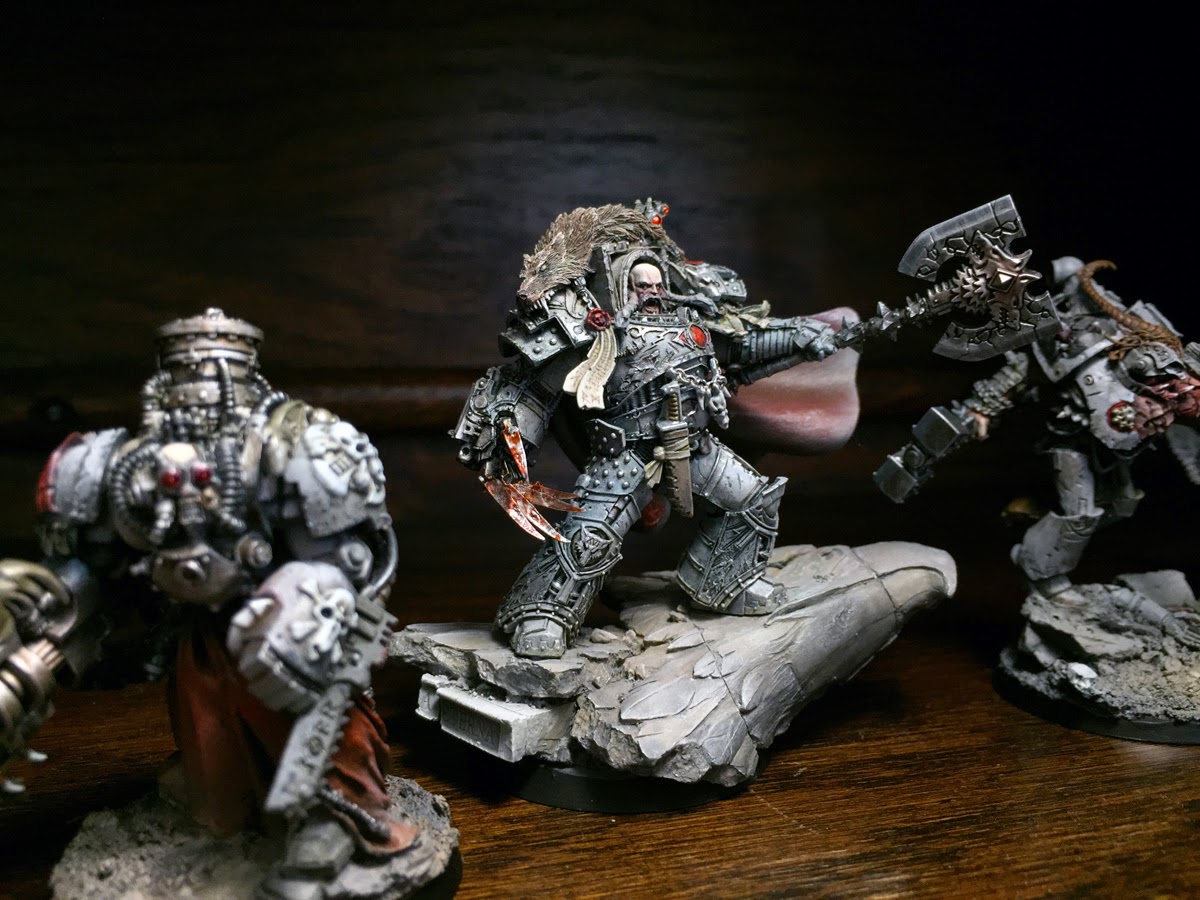 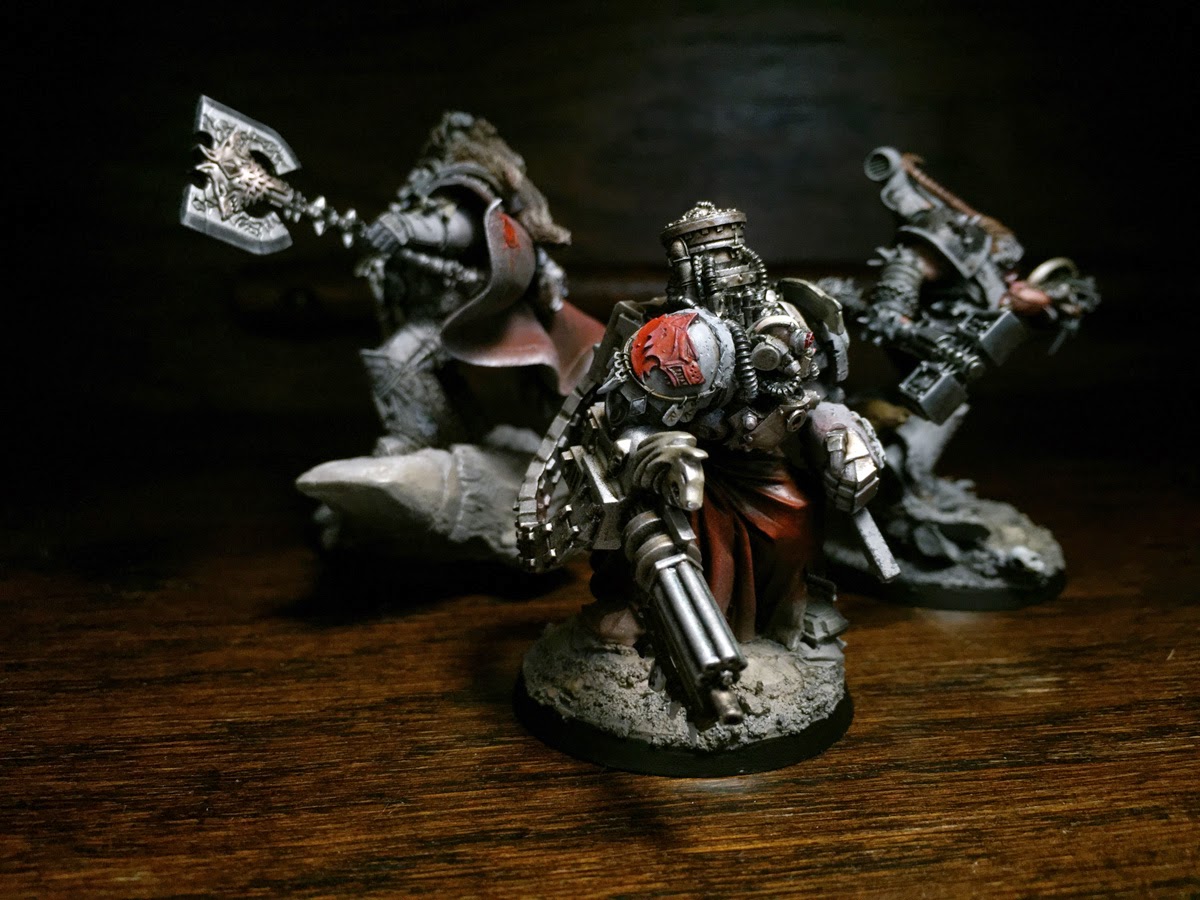 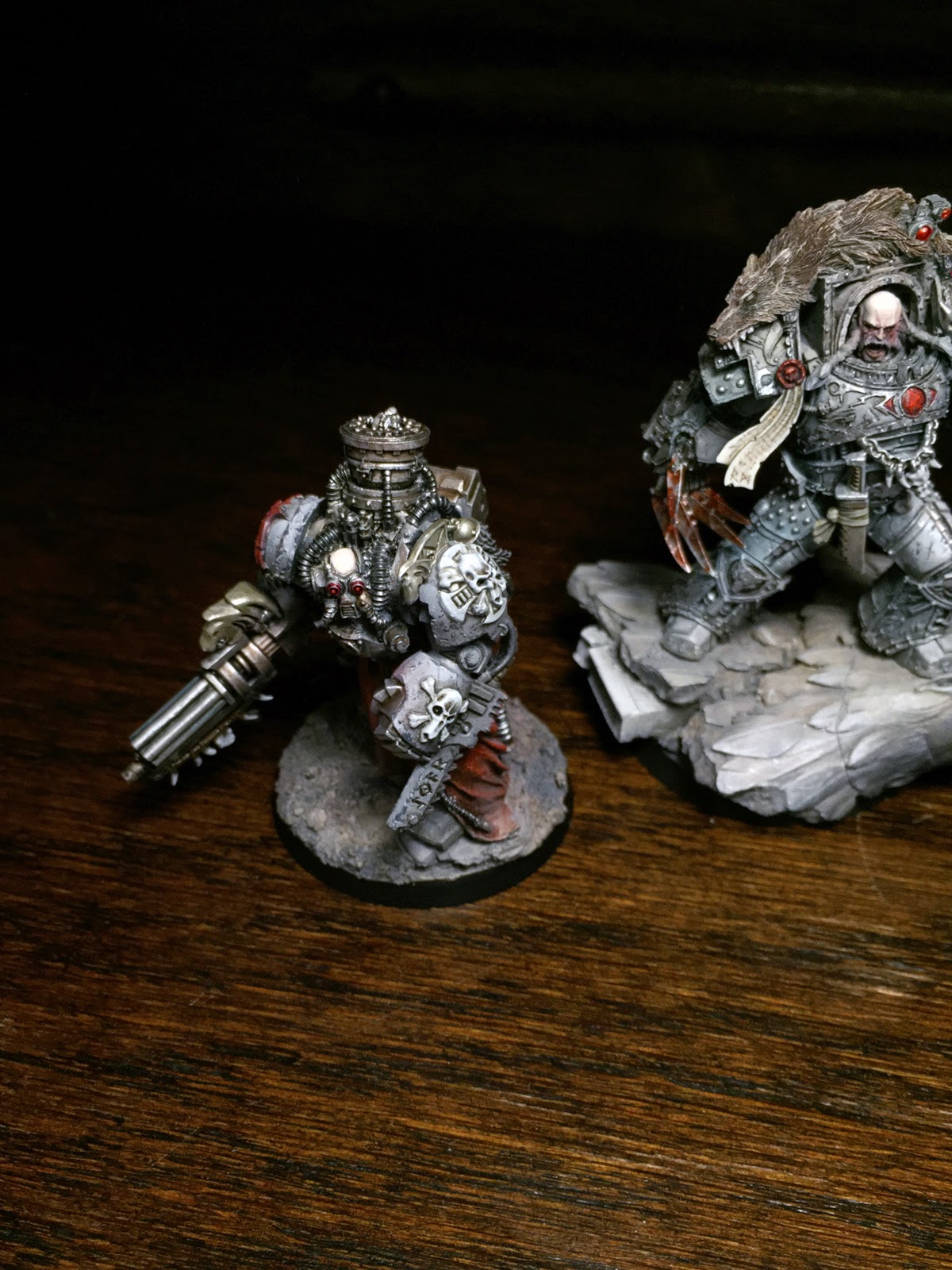 How does completely crazy turn to clinical insanity?

I just bought a ticket to the Las Vegas Open. I have always wanted to go. Now I hear subconscious  whispers about the impossible. Would it be possible to have a playable Army by February 2015? Maybe by bringing the Knight I already have? Maybe. ?

Not sure what exactly triggered this impulse, maybe the Solar Auxilia models I got in the mail yesterday. They are really really excellent. Forge World has really done an amazing job creating a fantastic Void Combat suited guard in 20 unique poses - and this is just the opening salvo. I am looking forward to building an Allied Guard continent of these guys.

Or the fact I finished the 3rd and 4th Space Wolf model. What ridiculous parody it is to feel such a sense of achievement after finishing all of four infantry models. (and a wolf)

Next step is to convince my crazy friends Spikey Rat Pack's Kari and Mikko to fly to Vegas with me.

Vlka Fenryka - Visions of War through a mist of paint, and sting of super glue.

Clearing out glass domes for new. 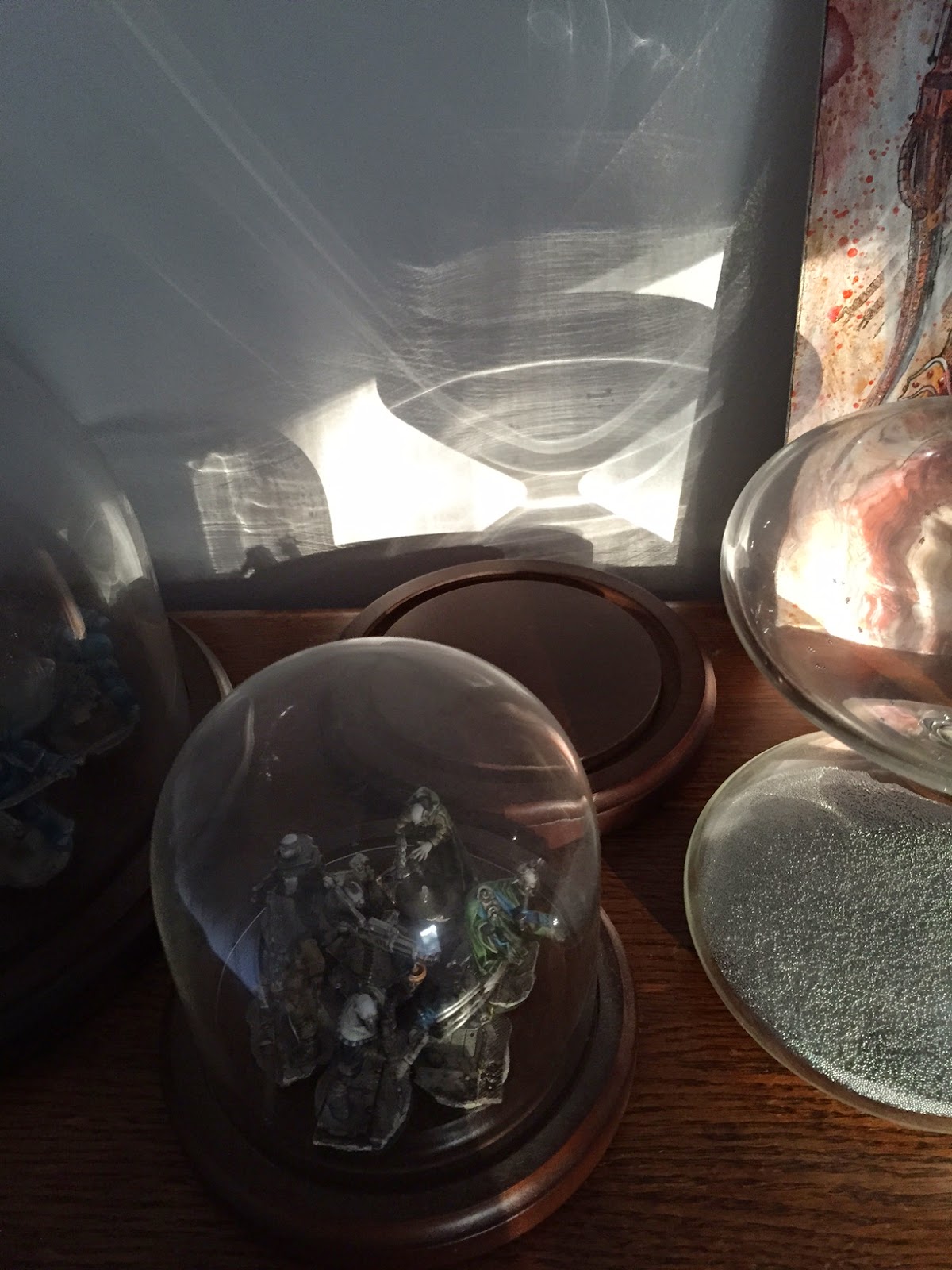 With every single army or squad project I've ever done, I've taken a new step - usually for the better. Some of the biggest failures have led to the biggest successes. Like the utterly plain and lifeless first take on Inquisitor Silas, and the explosion of bravery that turned him into such a visceral piece that immediately spun a retinue of grim darkness. I have purposefully tried to learn or achieve something with each project. Tried to combat mannerism, the plague of even the greatest of artists. I see an incredible amount of extremely talented painters who've completely stagnated to repeating what works for them (and at times very well I should add). I am too curious to stop experimenting and searching. With the Rout it is the same, yet different. I worked on Legion for so long, and learned so much, while staying at a fairly constant level in terms of quality that this reset has been fantastic.

Going from a water painterly work on white undercoat, to zenith oomph, understated realism, with very intense and deep metallics and plenty of flat bone and deep red in the mix. It's a fundamental new style, yet recognizably mine I think. The first 4 models I've been painting have each though me something important.

The fact that this time it's going to be a very curated collection, a very clear vision and not a collection of sub themes that span years, makes it quite interesting. I want to put the entire lot together in a year. I feel almost like a movie director might, or so I'd imagine ;). The kind who writes his own stuff and shoots it too. Different pieces are coming together. Ideas need to be evaluated on a whole new level. Not just that a good idea is great, it needs to be the RIGHT idea. Something that enhances everything else in the army. One key challenge is to do this without the backdrop. With every unit a centerpiece in its own way.

I'm guessing that a beautiful collection of calm Solar Auxilia could be the follow on to create the calm.

I'm enjoying building, painting, narrating the storyline and working out the army mechanics. All at the same time. I'm hand picking key drivers from Abnett's Prospero Burns, and each and every edition of the Space Wolves codex. There are some real gems in there. The way the current one describes the things that hunt the vast labyrinth of the Fang, or how the previous talks about the 13th.

It's becoming clear my Company is returning from the Eye of Terror changed. And with a direct link to the lost. The Taboo of all taboos for the Sky Warriors. Yet also what they have been searching for. The premise for the next great hunt, and a study of good and evil, of those deepest grey areas of loyalty. It's clear there is something in the subject matter that deeply attracts me. Like Alpha Legion, like the Inquisition, all so horribly grey to do good. I love the added twist of Space Wolves' hatred against the Inquisition, and even the Ministorum. The Vlka Fenryka history is ridden with bloodshed against the tyranny and dogma of said institutions... one of the very very few forces in the universe who can go unpunished.

The fact that these feral, savage beasts, are the most noble, honorable and humane defenders of the imperium of man. That the All Father's executioners are it's most keen defenders of the weak is a fantastic storyline.

PS. I have progress on the Wolf Priests bone crafters. A special order to tend the Wulfen perhaps. There is still a lot of detail to add. I have purposefully added detail that will force me to paint something I haven't tried before. Like glass orbs filled with blood and healing balms. 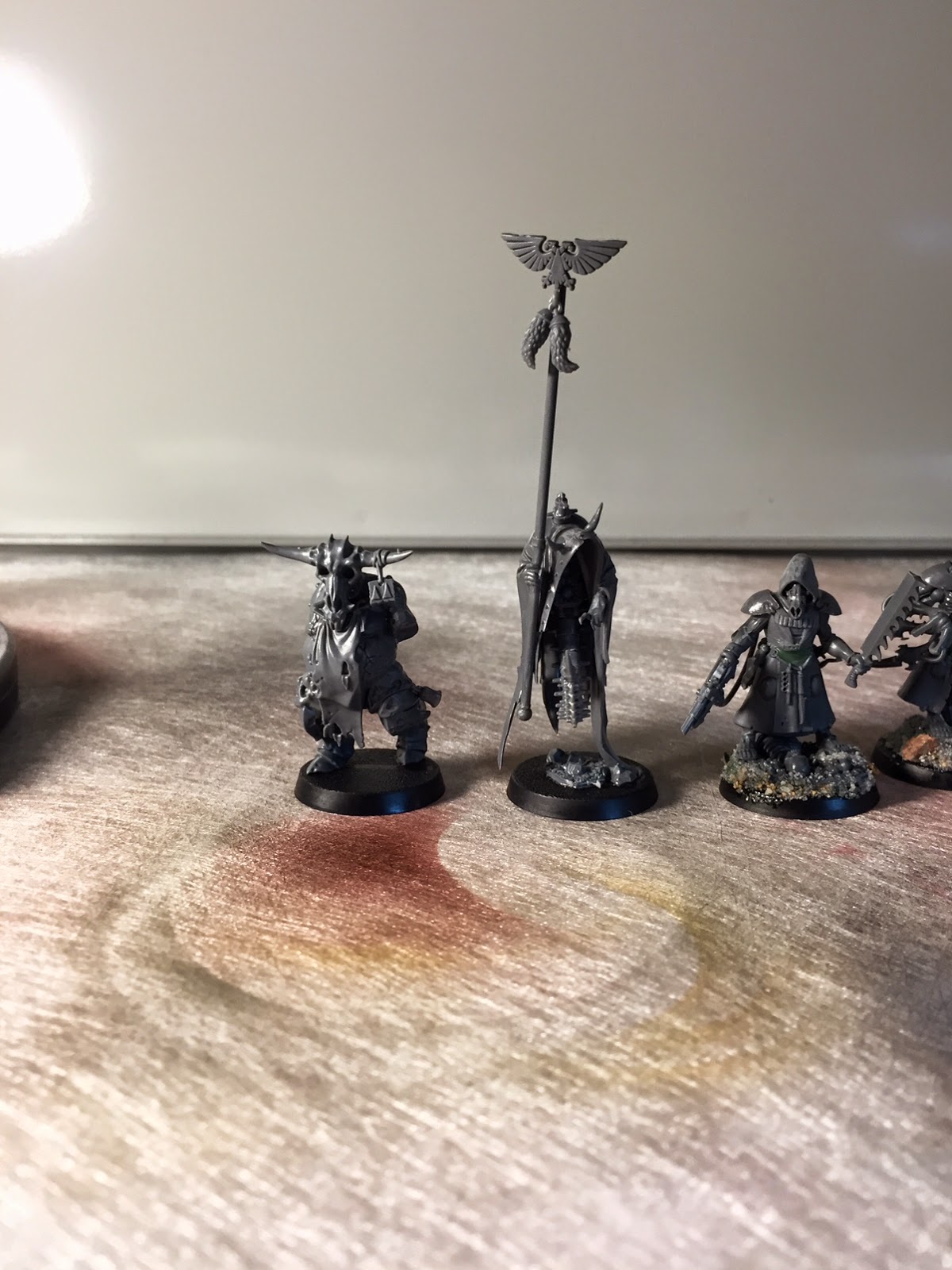 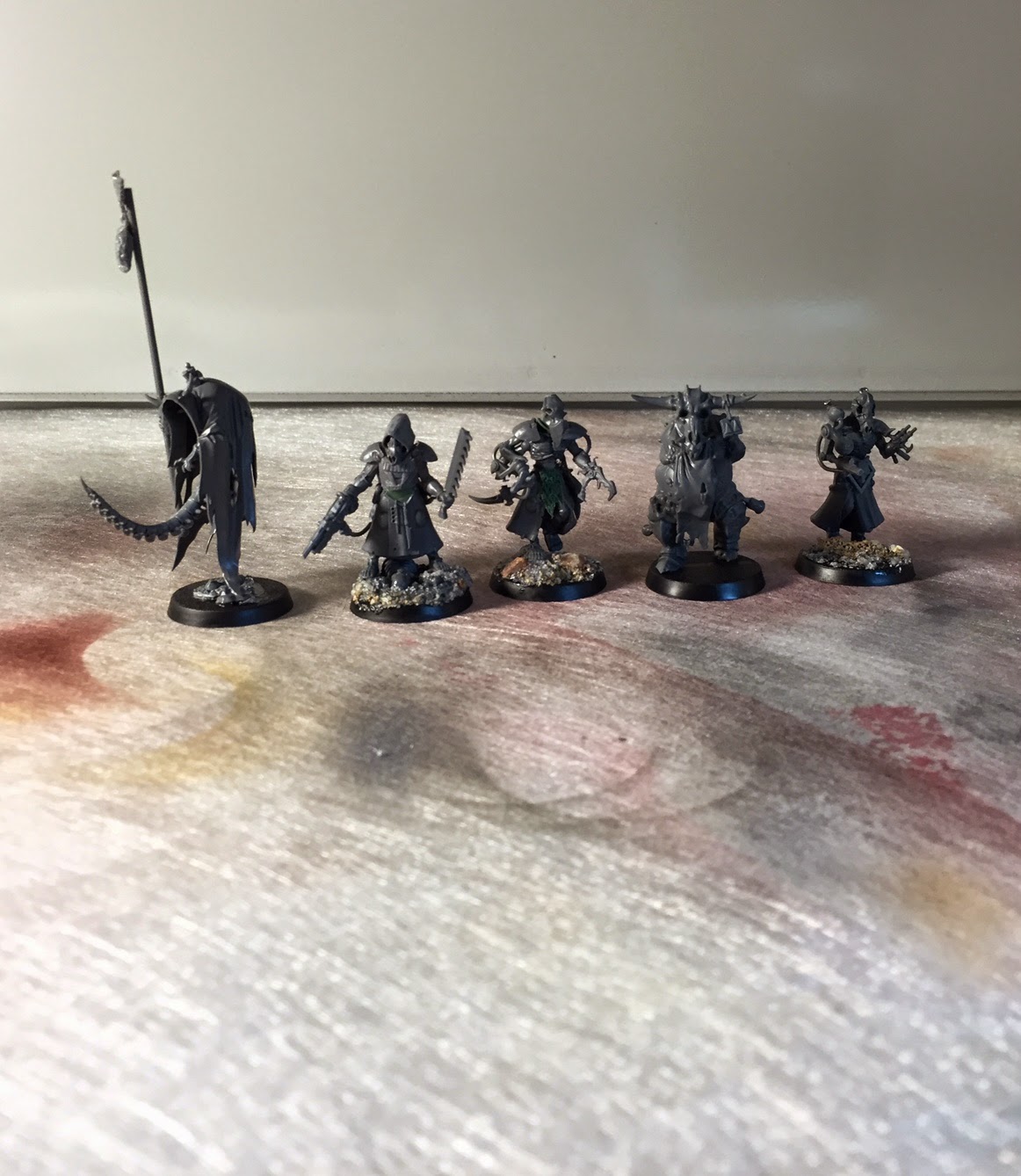 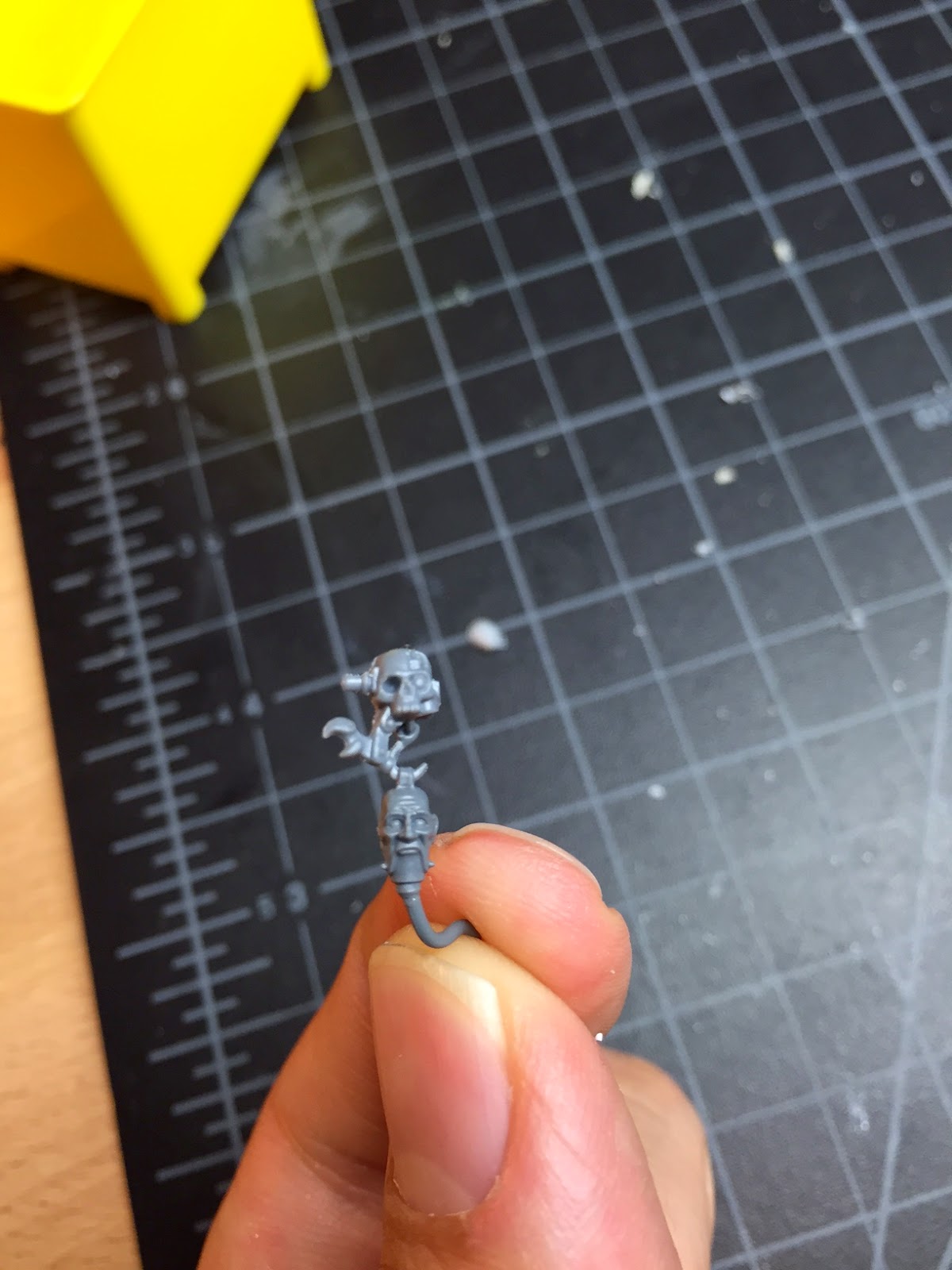