The Black Prince - a Freeblade Knight in the 41st millennium

After uncharacteristically reading the Codex, (yet to open the Tyranid Codex) and pondering on how to paint and where to take mine in the drowning sea of freshly finished Knights that is the internet, I've decided that.

I am going to go with the green direction, but a dramatic splash of Black introduced to the scheme. I haven't yet done moonlight black. So I am looking forward to that challenge.

So far the kit has been an absolute joy to work with. Only down side is how very long it takes to build one... 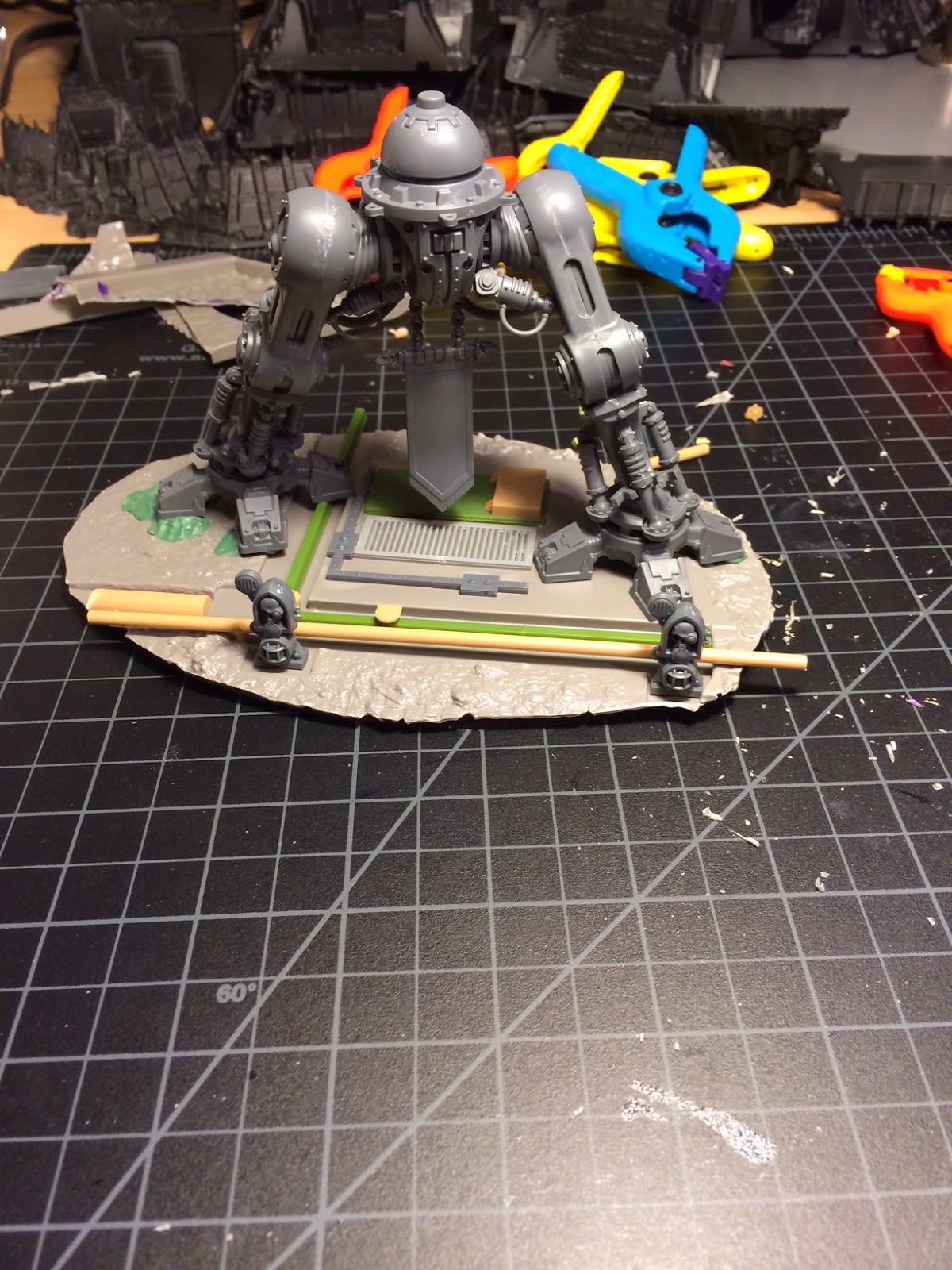 Knights on the menu and a happy modeler.

The internet is rife with the first painted Knights by hobbyists around the world.

I've just finished the perfect warm up exercise that has painted to one of my favorite models in the army. Quick picture attached, with the final selective matt varnish and weathering film still missing. I will do proper photos with the Big Knight. I want to show off the great rands in gloss, the improved metallics and more subtle airbrushing weathering.

Tonight I will unbox the knight!, and start by building an epic little base as always. I've decided I will build the Battle cannon variety, but I am uncharacteristically torn between picking a color scheme. Looking at three options and curious to hear what you guys think.

Whether I should do the red Mechanicus scheme that has served the Cyclops Battle Automaton and the Skitari so well. They are on the way to a nice little army within the army. I like the red, because it is a very unique way of doing red and highlights the moon light theme so well.

I could also pick a version of the Blue grey I used to do the IG vehicles. It weathers beautifully and is a very nice hue that would go great with big yellow hazard stripes (which will feature on any design I pick obviously) This way the Knight would really fit with the soon to be rapidly growing IG component and still stand out too.

And finally, I am entertaining a cold green scheme. Something that makes the Knight completely independent, a hero of sorts, with enough blue and off-white in there to make him fit in. Tempted by this, yet a little worried that my rag-tag horde is starting to loose coherence too. 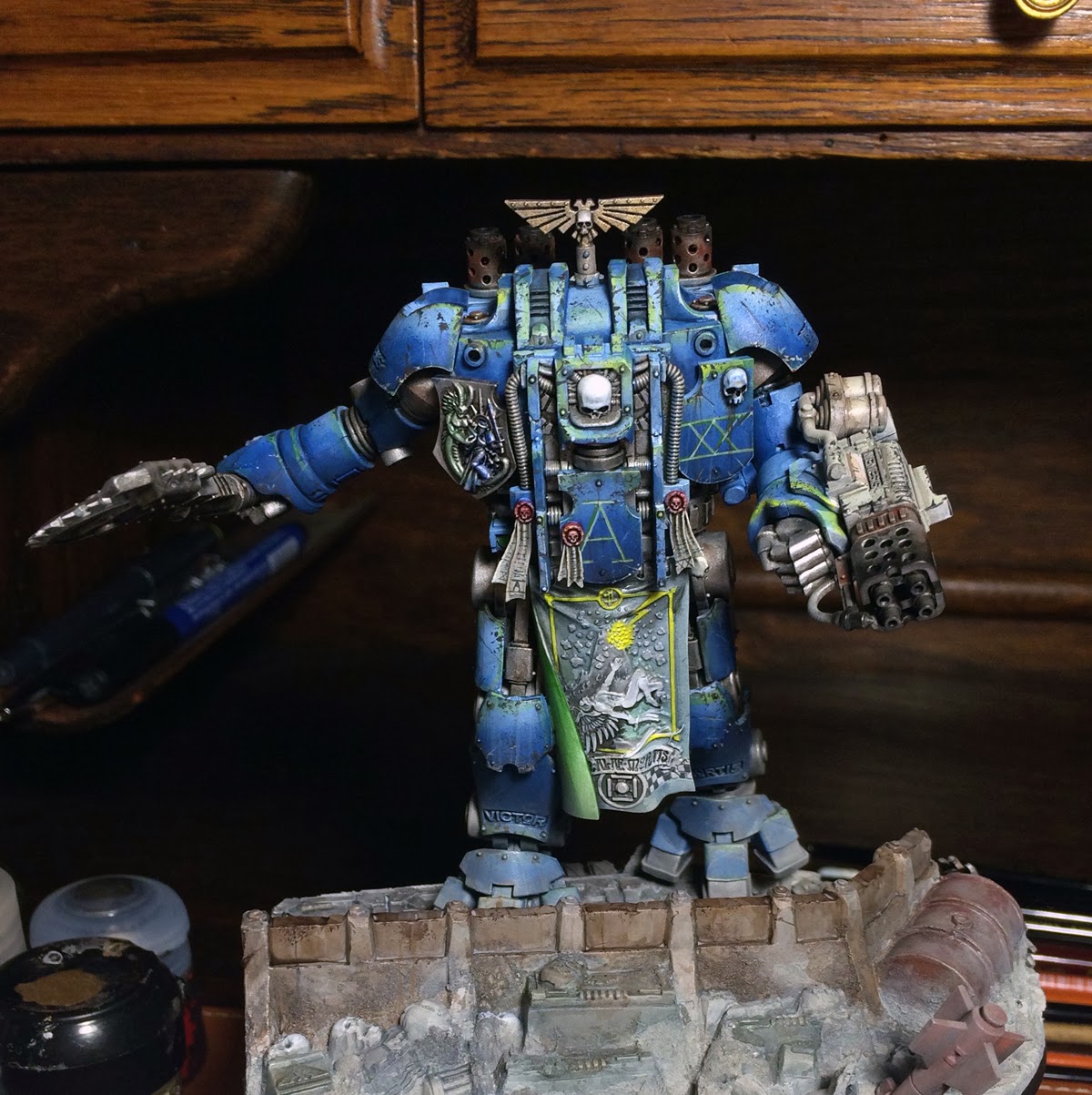 Five years of the XX Legion - Everything in three opposites!


"I've decided to throw out all the rules and just paint the way I feel I must and not be afraid of color. The project is inspired by Dainton's art as always, the Legion book and the pale, chilling light of the Moon."

Something has changed too, I have more tools, more tricks and a much better understanding of what I am doing, and it will be a mix of these additions that should keep the project fresh and exciting. The balancing act is between having the courage to evolve things to avoid mannerism and boredom, while maintaining enough characteristics of the original philosophy.

In 2014 I look at my project with these three pairs.

I play between each pair and constantly try and up the creative contrast they offer. I've recently introduced some exciting new tools:

I look at each very critically, brining a new dimension, a new vitality to the work and the three pairings that drive the work these days. I'm really focused at not letting the new tools change the essence of my work, only add to its character. The advent of Airbrush for example, has lead to many armies that look airbrushed from miles away.

Games Workshop has started out the year so strong, and implemented bold new changes that really benefit the hobby it feels, and it has helped energize the project. Looking back and forward to the future at the same time, plenty more of this to come:

"Furthermore, the Legion's rash, eager to prove, outrageously creative and utterly dangerous outlook on things is an immense inspiration, together with Imperial Guard armies of 2nd edition that had many different units and schemes. The relationship of superhuman warrior gods and their guard protégées has endless depth to interpret."
Posted by migsula at 07:21 5 comments:

A legend interred in a womb of steel 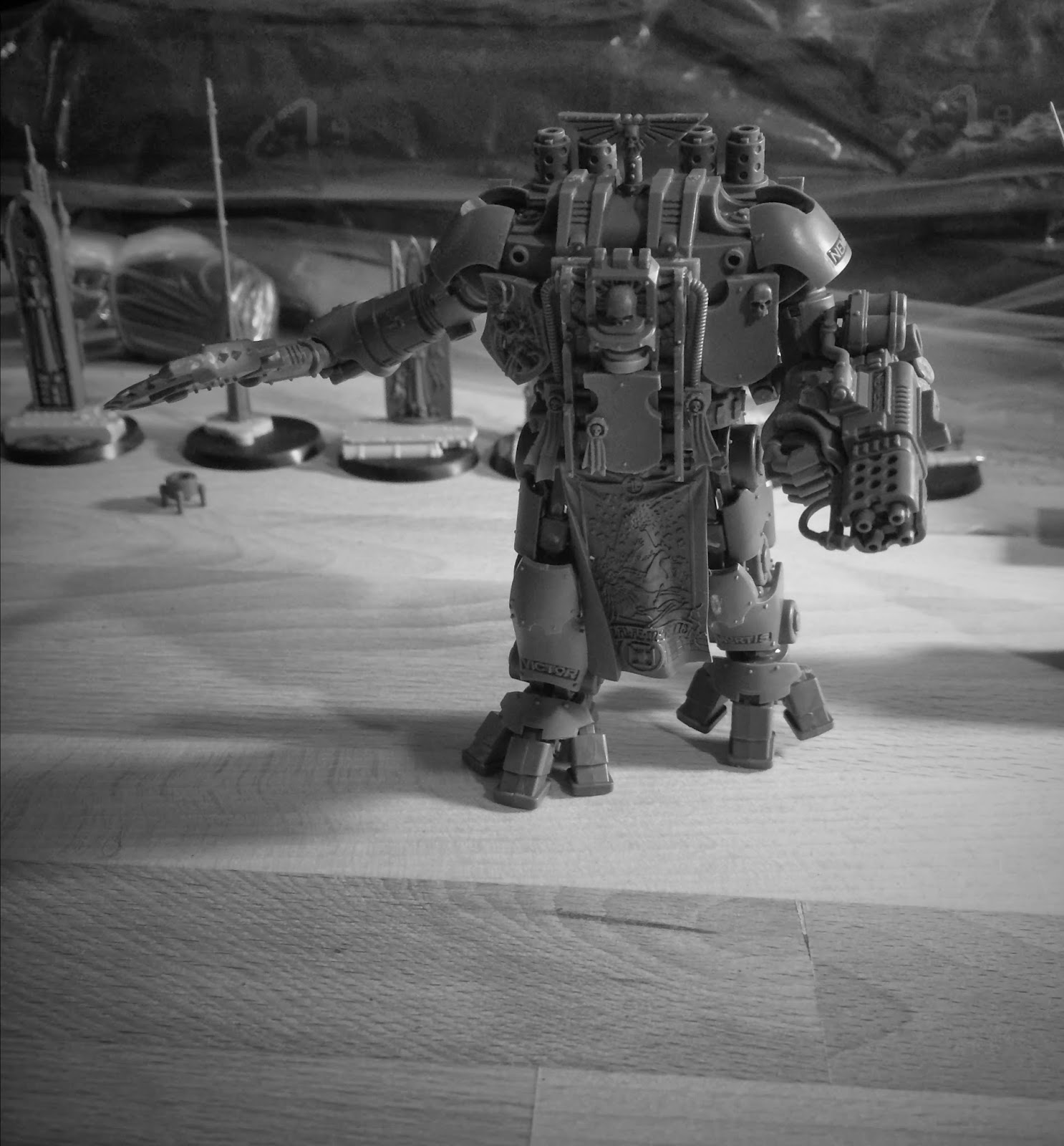 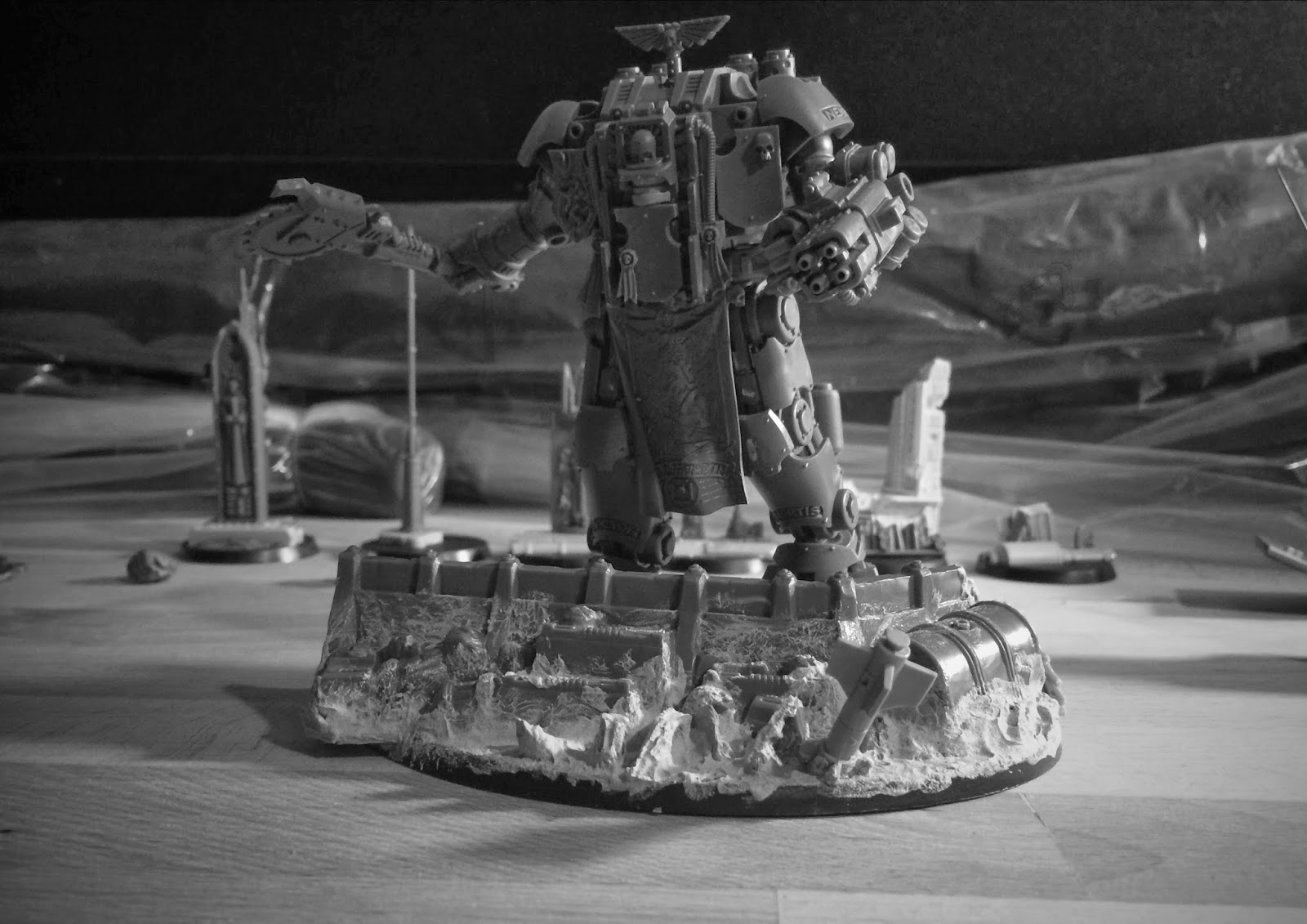 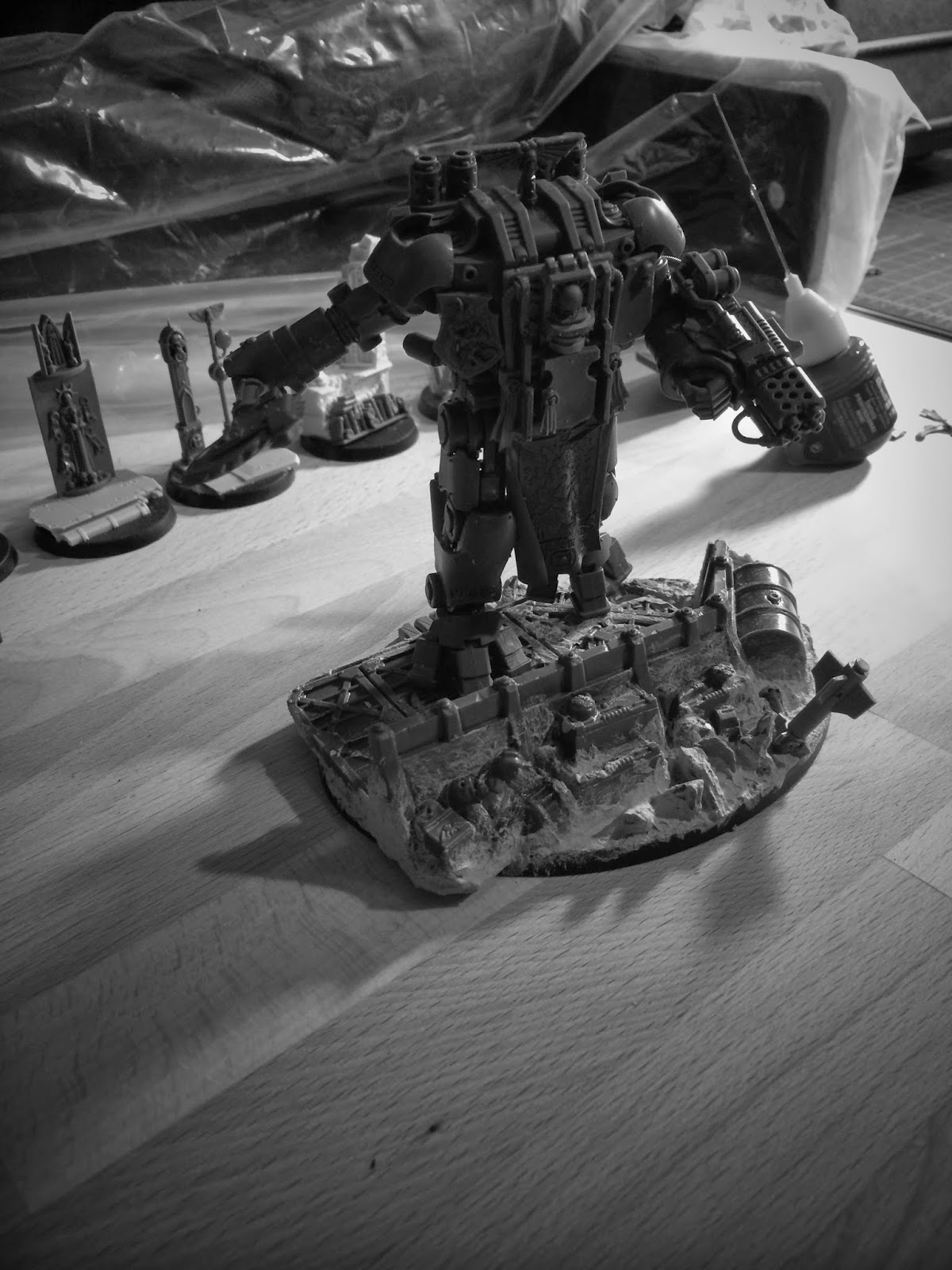