Years ago I was a fairly decent 40k player, finishing in the top 10 of the UK GT final (so first through the heats). I love gaming, but the scene here in Finland got so math-hammery and non inspirational in minis that I stopped going to tournaments. I am very soon moving to SFO and have heard so much good about Bay Area gaming, that I want to get back into playing. I really miss it too. Besides, the Army deserves some action.

What I've always admired is armies that are a little different, are not copy pasted from others, have a lot of personality and variation, and do well in large part because of the player. I also really like forces that have combat modifiers, abilities and tactics that stem from certain heroes making others around them better and more efficient or units that need to be used together. I see this more realistic, more fun and more inspirational than her hammer. I've only managed a dozen games of 5th edition when it came out though, so I would really appreciate if those of you who do play regularly would help me fine tune this lot into match shape and offer some tactical tips. (how would you set up, what lists will be most trouble, least trouble, etc)

The Grey Knights look like an awesome mid-range army, and a lot of 5th seem to reward that type of forces. They are active on each of the game play phases, another "must" for me when choosing what to play with. I don't have so many Grey Knights though, and won't make more than ten, as my process of creating a marine miniature is just so time consuming. Additionally I want them to look like and rock like Marines should. So God Warriors amongst men. The Grey Knight codex is a fantastic premise for that.

I intend to use this blog to also report about the gaming journey as I build, fine tune and then possible go to a big tournament again sometime in the future.

Our tiny little =I=munda / 40k group is tiny, 4 members, one of whom has been MIA for years, and very international. I was in London for 2 years, Northen is now in Kioto for 2 years, and next week I am moving to the USA for who knows how many years. That leaves Hammer, who needs to do some traveling I think ;)

And despite all of this recent converting action, the gaming and narrative fix with a bunch of good guys is really missing. Like I said, The Grey Knight Codex has been a welcome instrument and lately I've been playing with a list to build towards. I get to use pretty much everything I've built thus far and once a suitable group is built, some relaxed house rules might follow.

With the move ahead, I organized my miniature stuff, model, tools, paints etc. ready... and an accident occurred. I am mid way another  Inquisitor... Gotta put the creative urge somewhere with the day job missing for a few more weeks... This will be my count as Coteaz for Legion project, so not part of the trilogy.

This one is the most converted of all of the =I=s I've done. I am at 32 parts at the moment, with the lower half entirely missing. I attached a pic of some of the parts. There will be GS on them and a very striking two tone paint job. Again I seem to have a clear image in my head, lets see what comes out of it.

And a quick look into my bits box, one of the dozens compartments with assorted stuff for future 40k personalities. 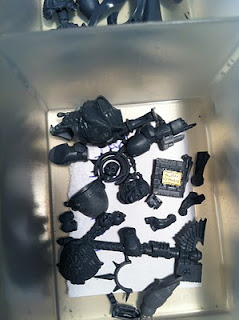