“Of the fabulous hydra it is said, cut off one head and two will grow in its place” - antique proverb


The utter silence tuned into a screaming crescendo smoothly like a curtain unveiled before the act.  Fourteen Chimera Personnel carriers sat on the dry ground, their cargo perfectly lined up in front of them. The Stormbird touched down briefly. Clouded in dust it rose again and took away the crescendo. Silence. The dust settled and revealed five figures, two giants in  midnight plate, a Het of the Geno Chiliad, a robed man and a frail, incredibly elegant character. A sharp clasp sprung as 166 Elite Geno Guard snapped into attention with near inhuman precision behind the General Governor, Geno 4-4.


The fate of the system was decided between this conclave, with only the desert as the witness. No written or other document would ever reference this event. The true rule was established and the trials of  Vipera were initiated. “The Tacit” an elite military formation was born that day, but their history makes no  mention of their forming, and verbal account does not cumulate in a unit of mouthless men.


They needed to find him and find him they did. Didn’t feel that way now, did it. It was fething cold, the humidity of the earlier thunder rains was whisked around by the brisk sea wind flowing through the forgotten docklands. The full moon cast a pale, icy glare that froze the shadows of the stand off.
There he was, in rugged civilian clothes, armed with a brace of pistols, Sgt. Jargassor, whom all needed to find - the least of their concerns now.


The entire hunt team had their retinas transfixed on the massive being next to him. A dozen weapons of different make pointed at him for what little difference it made. Standing two and a half meters, a god of war, clad in a huge suit of armor the color of night, the giant stared back, immoveable like a statue, yet radiating explosiveness like an unstable flux core reactor.


The wind turned only to punctuate the stalemate.


‘I am Alpharius, We are Legion‘ The giant announced in a distinctive, flowing, silky, yet authoritarian voice.

A Band of Brothers


Bone jarring grind engulfed the wadi, Wrath of Vulcan, a Storm Lord and two Baneblades: Steel Dancer and Equilibrium powered forward in triangle formation, followed by two companies of Leman Russ Vanquishers, tiny in comparison. The plain on both sides was a hell storm of fire and smoke, as the 2-2-1 Artillery blanketed the approach invisible. Forty-two Chimeras followed the main battle tanks into the wadi, carrying the 3-7 Renor Grenadiers.


In the huge border county hive, a squadron of Valkyrie screamed thorough perilous support beams and hab structures. On board squads of the Tacit sat in silence, meditating the battle plan. Each could feel the stream of data in their comm implants, as their rides banked from side to side to navigate the tight approach and avoid the intense flak.


Sgt. Jurg of 3-7 double checked his watch, briefly revealing a hint of dark blue tattoo. A symbol bearing clear resemblance was also found on Colonel Rafs’ Chest, underneath the ballistic cloth that the Storm Lord crew wore to work. Comissar Grennel wore a signet ring with a snake around two crosses. Each and every one of the Tacit had a burn brand XX on their left pectoral muscle. Then there were the Stealth Cells, like Effrit, who wore much more developed and hidden brands.  All told, over a thousand man or women preparing for war, training and training were “Legion First”.


A bastion of Imperial might, Rhisinne, it’s twin guardian moons Vipera and Pythan and 3 satellite worlds Quntus (agri world), Renor (geo mineral worl) and Falkh (Cardinal World) together form an empire  of indomitable attrition against the fury of Maelstorm and the countless Xeno foe in the eastern Fringe. The System is gaining respect and referenced with the Likes of Abdus Prima and Gelt, even Ultramar, in productivity and model of Imperial Creed.


Rhisienne’s illustrious history draws close to the annals of the Heresy and it’s aftermath, but the founding of the mythical and elusive Blades of Laerna (Gene Seed unknown) chapter in M36 chartered an age of growth and strength in the region. In particular the pacification of Xenos hostilities in the region was profound.


The Adeptus Terra allow for considerable leeway in the dealings of planetary governing bodies, when the tithes are met and regiments raised. Rhisienne has been exemplary on both accounts, but the behavior, and in particular refusal of the Blades of Laerna to fight together with other Chapters, has warranted two Inquisitorial investigations on their conduct and position of power within the system. No conclusive findings have been made, but nor has anyone been allowed on the twin moon bases of the chapter. Four different Inquisitorial Conclaves have argued the issue. The Chapter seems to have a veto of sorts within the inner chambers of Ordos Ultima Segementum.  Not so with the Astartes. Infuriated Captain Sicarius of the Ultramarines, normally the image of calm and tact, has reported his apparent disgust at a Blades of Lerna veteran, who outrageously introduced himself as _Heretic Name Scourged off records_, before disappearing without trace during recent operations against the upstart Tau Empire. This is but one of several shows of disrespect and bravado, or outright non co-operation. Some less taciturn chapters have threatened with open hostilities.


Rhisienne System can boast with two legendary Imperial Guard regiments, the Renor Grenadiers and the Elite Tacit. Furthermore the Rhisienne PDF is a top tier military formation, in high demand across the sector and beyond.


The system is a very model of Imperial values and strength, determined and resourceful.


The continuum of an =I=munda project, to 40k and then Apocalyptic and BFG scale.
As with the initial project   (dakkadakka blog ) , two philosophies guide this project:
"As I am increasingly becoming aware of myself as an artist, it is becoming increasingly difficult to stay on track so to speak - or rather immensely liberating to just go where the inspiration takes me. "
"I've decided to throw out all the rules and just paint the way I feel I must and not be afraid of color. The project is inspired by Dainton's art as always, the Legion book and the pale, chilling light of the Moon."
Furthermore, the Legion's rash, eager to prove, outrageously creative and utterly dangerous outlook on things is an immense inspiration, together with Imperial Guard armies of 2nd edition that had many different units and schemes. The relationship of superhuman warrior gods and their guard protégées has endless depth to interpret.
You will get to see the hideous Tacit, the Heavy infantry Grenadiers and the distinctive Rhinisienne PDF, as well as super heavy armor, valkyries, different Stealth Cells, Cabal Agents, and of course a few more of the Legion.
I hope this blog becomes an open forum of discussing several aspects of the hobby and everyone feels like they can say their opinions and interact the way they want. I'd love to hear just "I think it's cool" if you think so.
I also do hope to go quite deep in some artistic crap, mainly in how I see the miniature painting having reached the age of "image perfection" and next can come true, unrestricted age of impact, rather than technique. If you look at the evolution of classical painting - and finally the age of camera and then photoshop - you know what I mean...and this is not to go I'm going to go Pollock on my models, but I shall use this samurai image from the genious Goodbrush as an example once again:
http://www.goodbrush.com/
The Green Samurai is on the second page, but all of his work makes my point. Is it technically Perfect portrayal of the image? Is it absolutely Perfect portrayal of the image and feeling?
Here's everything I've done for this project up to now - it is currently the second of my two big hobby undertakings, the other one being the Inquisitor trilogy. Legion and Inquisitor will be the key tags of this blog that divide the content 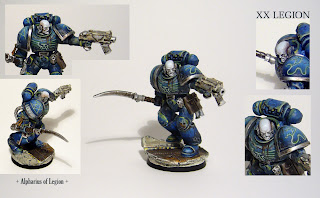 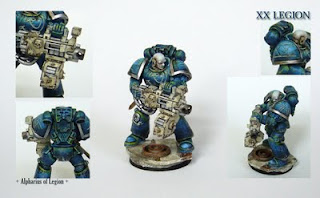 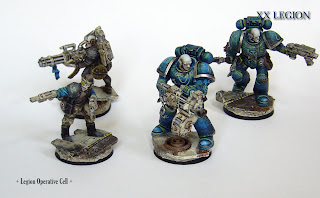 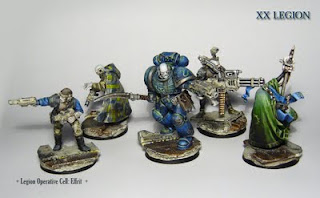 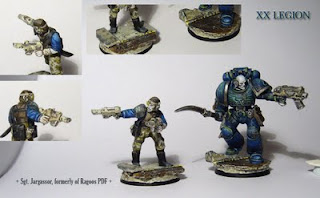 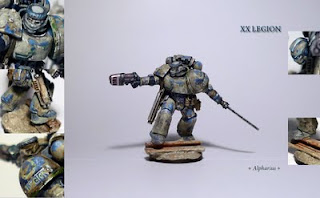 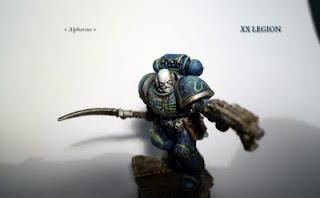 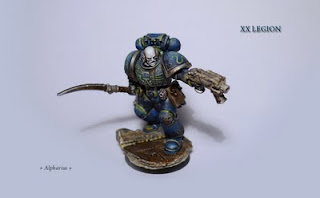 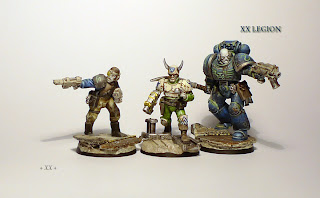 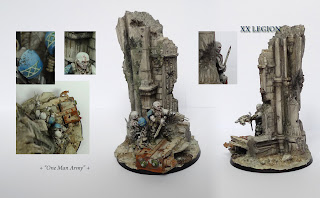 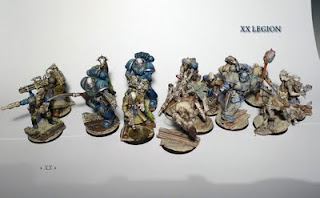 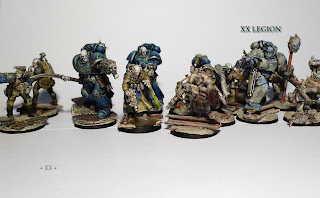 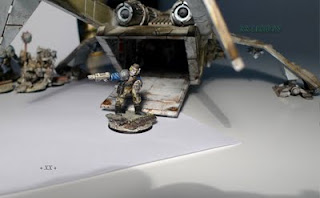 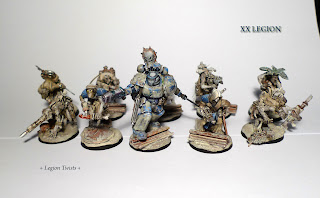 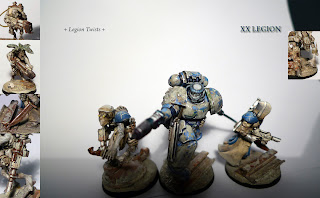 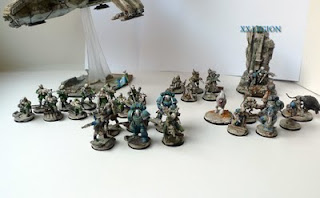 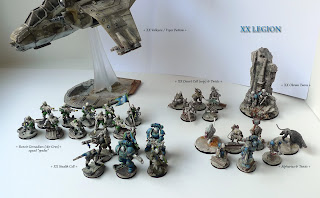 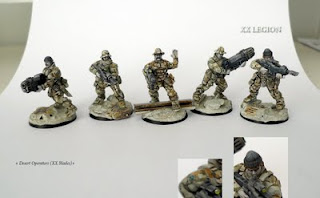 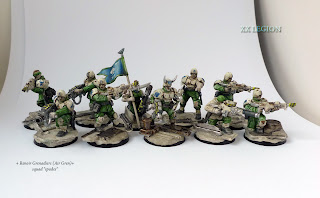 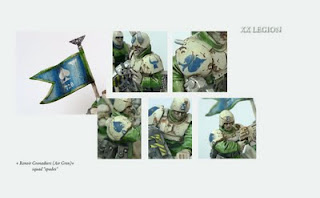 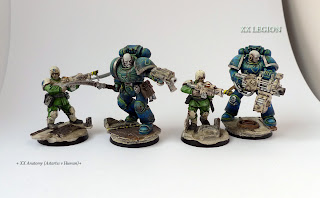