Recently a duo of great modeling minds: "PDH" and "Baiyun" got together at Dakka and decided to host a friendly invitational in the honor of the fantastic new Brian Nelson wizards. Simple goal to convert one to a 40k model. They were kind enough to invite me along too:

"Pimp My Wizard" at Dakka"

A fantastic celebration of the best aspects of the hobby. Creativity, dedication, friendly banter, common goal and a variety of styles and approaches at play.

This was an excuse to start working on the "bad" continent of my =I=nquisitor trilogy, the joint effort and collegial challenge being the best of motivators, and here is the first piece of background story and a few WIP pics with some captions. I'm keeping the finished =I= hidden for now - to show it with the other contestants. Needless to say - the Inquisition being a hobby love affair, and the bad aspect enabling so much mobility in terms of character development, I only hope I'd have more hours in a day.


I traveled in the rotten carcass of a long dead elevatorum engine. All 244 floors of the derelict hab block flashing through where the doors of it once were. Glorious wave of sparks shot down after the engine like an afterburner. I like to make an entrance, that is why. Slight psy frost begun to cover the engine, a side effect of my telekinesis.


I knew what awaited me at the top. Because I was there as I am here. I willed the murdermake, or rather directed the absolute onslaught. I tasted the blood and watched every single one of them die.


A beautiful mechanical chime announced my arrival and I walked in to the main hall. The smell of blood was quite intoxicating through two separate noses. The cohort of witches surrounded my price, tightly packed behind a wall of vortex brought alive through their dark sorcery. My Alter-Daemon paced around the warp barrier. Such brilliant tool, such a cost to acquire it.


He cost me, it cost me. It cost me in resources and in the trust of much of the Ordos, narrow minded as they were, are, in the face of new, groundbreaking weaponry. Ignorantly labeled as a Daemon Host. They do not understand the forging of an Alter, of the genetic link and chain of control I project on the beast. It cost me much of my war-band, great warriors all of them. Oh yes, it also cost some dozens of collateral lives before I full mastered it. It cost me most of all.


But such a daemon. A bargain.


I burned through the feeble wall. They were powerful psykers, but not close to what power I posses, not close to the training they gave me, and I made their hearts explode. Not taking any chances, too eager to start.


I entered his mind, he and I blinked.


And I saw through his eyes. Through his eye to be exact. Into my eyes. I felt his terror, but it was overpowered by intellectual thirst. It was sublime. Such a clear and purposeful mind. The Mirrormaster, Lord Seer, Hereticus Diabolicus, sector threat three. There was I, cowled in ethereal alien robe. Cream in color, projecting the symbols of my trade on its surface. Encased in crimson carapace, wrought by master artificers to protect from harm and to provoke dread in equal measure; and to integrate the incredible psychic hood from Titan. A compact seismic hammer in hand and the vampire blade sleeping its endless nightmares in its protective alloy scarab. Another special piece made in the forgeries of Titan when such places would still cater for me.


I felt them before hearing them, before seeing them through his one eye.


Nevvie & Chaide set down besides me. Their huge, impossibly complex, synthetic wings a whirl that ultimately suspended them a few feet from ground. I was to make a job offer. Chaide carried the reward I would promise. Nevvie the tools for signing.


I blinked back with an understanding. 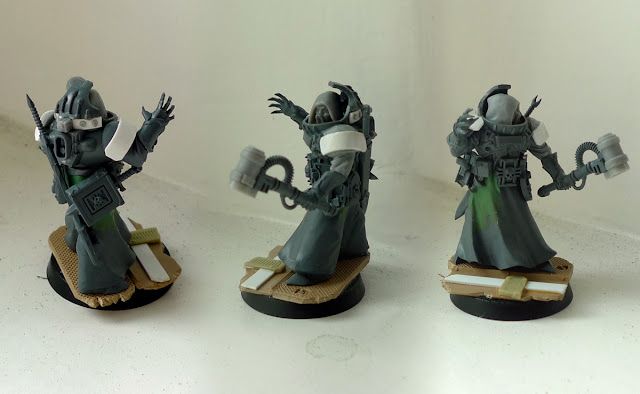 I've let my mind run riot. And had some fun!
The Mirror Master will be a disturbing mix of woodoo priest with a big hat that hides eyeing apparatus (like a swiss cookoo clock) and a locksmith with intricate tools. He cheats death through his craft, and collects psyberskulls to carry his mirrors around him for perfect angles. His breath stinks of hive grade amasec and rotting teeth.
I did some of my favorite hobby work the other day - organizing all the bits for coming conversions. I'm spoiled with bits these days as I've slowed down and not doing many armies anymore I can pick all the quality sculpts and go town. Clearly more than half of the models I now buy are WHFB stuff that gets converted into 40k worlds.
The Alter Daemon is the new Ghoul King from the Undead Dragon box and needs very minor conversion - though I'm entertaining a very surprising head swap...
My plan for the Wingkins is that they are servitors crafted with only one purpose - to freak you ought. In a universe where every race is designed to freak you ought, I need to push a little harder and be a bit creative how that will happen. Terror drones. Not much flesh remains. Two of them.
And the final model in the retinue will be a Sister Repentia. She will be the anchor. The little good that shows how bad the others are. I'm introducing some new character concepts, so it's good to have the =I= and someone else who is kosher 40k. With a twist of course.
As with Lord Silas, I Painted a bit more on the cape. Looking at him as an individual, I'm thinking I should've gone for a very dark cape instead, but the darker creatures around him, I think my overall vision for the entitity - trilogy part 3 - the bad - works. Only small detail and effects to add on Lord Silas now. So only the most enjoyable parts left + base which always caps of my work and feels immensely rewarding as you know you're almost done. My bases are a little bit like a signature for classical artists.
Behind this work, is =I=munda, a longing for another proper Hammer & Northen & Migs & new guys =I=munda is back, take two, masterful campaign that surpasses all campaigns. I would finish the terrain, and add some more. It's my remaining hobby dream left, much more dear than going to GDs or playing in tournaments again. That one day there is part 2 to our =I=munda adventure. We'd all build two new gangs, or one more, so we'd have an "evil" and "less evil;)" gang to play with, and have more narrative scope and team play potential. And even more back stabbing and surprises.
Here's Sister Valencia, Repentia Illuminati, Fugitive of Haros and the resident pathfinder.
NOTE: I've purposefully used the daemonette head for the large, lidless eyes and glued tiny bionic eye parts on them, to rep some of her war gear and to build on a scheme of =I= given enhancements. She will get sculpted, torn shirt that will be suitably explicit, and I'll look into folding the front of her tabard, to mimic the wind blowing from the base. Lots of small things going on, and I am quite excited of the start.
In terms of character development, I want a Sister of Battle with all the combat training and zeal to start with, wrongfully punished and shamed, who went through hell and back, and is the only kind (if ruthless) soul in the band. Her years in the clandestine service of =I= Silas, in the hives and border lands of the Imperium, has greatly influenced her attire. She has taken a martyr attitude towards the sororitas and their polished look and embraced the augments that let her kill the emperors enemies with greater precision. She is Silas' "heart", trying to keep the master in the Emperor's light during the black pit that is their journey to deliver Justice. Hanging in her neck is a single blessed bolt gun round - for Silas, if and when the great enemy conquers. 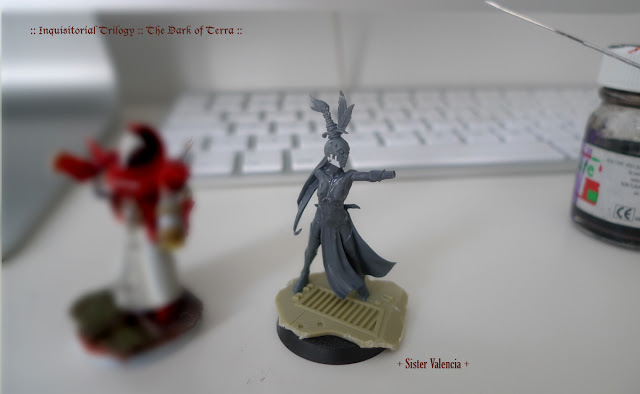